All is well here in baby land.

Elliott is recovering from his surgery.  His finger is still pretty swollen.  The surgeon said it could be from where they effectively broke it, or it could be that he still has a piece of the frond in his finger.  The good news is that the infection is gone.  The bad news is that if the swelling persists and his little body doesn’t absorb the frond, he will need an MRI and another surgery to remove it.  I haven’t received a hospital bill yet, but I cringe each time I open the mail box.

We also had him tested for allergies–and all things are negative.  What we may have thought were allergies could have been a chronic cold.  He still is having a facial skin reaction to something…but we haven’t been able to nail down what yet.  All things considered though, Elliott is back to his joyful, silly, energetic self.

Spencer is awesome.  He is a very happy, easy going baby.  He is extremely vocal and will tell you when he needs something.  He, like Elliott is growing up to be a big boy.  I took Spencer to his 4 month appointment a couple of weeks late, but he weighed in at 17 pounds (90%) and 26 inches long (90%).  I looked back at Elliott’s numbers when he was the same age and Elliott weighed more but they are the same height.  Spencer is also a WAY better sleeper than Elliott was.  Perhaps that is because we co-sleep with Spencer and we didnt co-sleep in the same way with Elliott.

As for me, I accepted a temporary part-time consulting position.  The office is too far from my home to consider anything permanent, but I like the flexibility of being able to work from home on occasion.  I feel like a productive member of society again.

I put my Stroller Strides membership on hold for a while because of all the medical issues we have had as well as the drama that SS has been dealing with regarding permitting with the City of SD.  I still need to find some sort of exercise outlet to help me lose 10 more pounds (if not more) and we are thinking of joining the YMCA.  I loved getting outside with SS and socializing with the other Mom friends I have made, but I also want to get a break sometimes, and the Y offers babysitting services.

This awesome photo of Spencer was taken by Jenna Rowe Photography 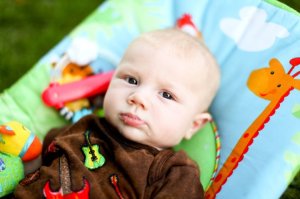 A Mom’s work is worry…or so they say?  Well, I must be working OT.  Or so, I feel anyway.  While I recognize that this is small potatoes compared with many families medical issues, this was scary for our family.

About 5 weeks ago, Elliott was angry and struck a pygmy palm tree with his hand.  He cried for a bit, and was over it.  I looked at the wound and didn’t think anything of it.  It wasn’t bleeding, there wasn’t anything stuck in his finger that I could see, and he was back playing fairly quick.  But, the fronds had spines on them and I knew that one must have poked his finger.

A few days later I noted that it was swollen and he wasn’t using it.  I mentioned it to the hubby, who in typical hubby fashion, said not to worry about it.  I called the nurse line at the peds office and they had me come in.  By this time the finger was really sore and he was complaining about it.

The doctor noticed some redness and spots on the top of his hand, but no other signs of a problem.  She thought that perhaps it was infected and wrote us an RX for 10 days of Keflex, 4 times a day.  40 doses!!  After several days on the meds, I hadn’t seen any improvement in the swelling, so I called the ped office again.

We went to a second appointment, and I ran through the whole story to a new pediatrician and resident.  They thought that perhaps he jammed it, similar to a basketball injury.  But, just to be safe ordered an xray.  The xrays were negative for a break/fracture.  So, the doc said, in a very dismissive, insulting way–to go home, take the rest of the antibiotics and call if the swelling was still there after we completed the meds.

I went home feeling like I was overreacting and started to question my intuition and parenting skills.  On top of that, I was almost out of medication and he had only been on it a few days.  I called the pharmacy only to realize they shorted us a bottle of the medication.  I had to walk through the dosage math with the tech to convince him that they did it wrong.  Some of my confidence was subsequently restored having discovered that it wasn’t my dosing error but their mathematical error. But, having to go back to the pharmacy again bites.

During this same time period, I was finally able to get Elliott in to see an allergist.  He has had what can only be described as allergy symptoms for a few winters.  They did the skin prick test for environmental allergies and all of them come back negative…  I am now feeling extremely over protective and wondering if I am being a hypochondriac.  Not to mention that our insurance deductible is $6k–so all of these visits and meds are out of pocket until we reach our deductible Yes, SIX THOUSAND DOLLARS.

Elliott finished the medication.  We celebrate hubby’s 40th birthday party. Another week goes by and I notice the finger is still swollen.  I ask around to be sure I am not being crazy and paranoid (this occasionally happens), and I call the nurse line again.  2 days later the doc calls back and says they are going to refer me to an Orthopedic doc.  I ask him what his line of thinking is…and he says, that they are out of ideas.

Hmm, ok.  We go to the Orthopedic doc on Friday morning.  They don’t have our appointment on the books, but take us anyway.  But, first we swing by the lab and Elliott gets his blood drawn for a RAST test.  He had 2 skin reactions to what both his daycare provider and I thought was peanut butter.  More worry and panic.  Needless to say–Elliott was not pleased to have a blood draw.  But all things considered he was fairly reasonable about it.  And stopped crying as soon as I released his arm.

We see the ortho doc, who is about as quirky as Johnny Depp in Charlie and the Chocolate Factory.  In fact he looked in my diaper bag twice if that sheds some light on it.  Well, he ordered 3 more x-rays.  Urgghh.  More x-rays!!!  Elliott has had x-rays 5 times and 4 of them have been in the last 6 months–ankle (not broken-phew!), clavicle (broken), chest (Bronchitis), hand/finger twice.  He comes back and advises me that he has a bone infection.

Um, excuse me?  Yes, I heard him right.  Osteomyelitis.  He started saying things like blood work, hospital admittance, MRI, surgery.  I called the hubby and asked him to leave work and meet me at the hospital asap.I was very nervous and needed support.

The doc wanted to get more blood work to help confirm his diagnosis. Poor kid braved out one blood draw, but now needs a second one — on the same day!  The blood came back OK, so they wanted to order an MRI.  Apparently for a kid to get an MRI they have to put them under general anesthesia.  So, we were looking at a hospital admittance.

Uh, not exactly what I had planned for my Friday. But, ok I am rolling with it.  Trying to stay calm for my son’s sake.  He was hungry and thirsty and begging me for water–and since he was going under they wouldn’t let him eat or drink.  We end up waiting several hours for a room vacancy, and by then the anesthesiologist for MRI had gone home for the night.  We finally speak with the surgeon who was confident that either way surgery was needed.  And by skipping the MRI we would save thousands of dollars (see above for insurance deductible)

So, at 6:30pm he went in for surgery on his finger.  They drilled 4 holes in his bone, released the pressure, took some samples of the bone and tendon fluid, and stitched him up.  It was heartbreaking handing him over to the OR nurse and watching him walk back to the OR with her.  Everything went great, and the surgery only took about 40 minutes.  We were out of recovery and back in the room by 8:00pm.

And by 9pm he was drinking water and eating Popsicles on my lap.  By 10pm he was fast asleep with Daddy by his side.  Only one parent can sleep in the room with him, and since Spencer wont take a bottle–I had to go home and the hubby had to stay.  I was back bright and early the next morning, and he was already running down the halls and eating a HUGE breakfast.

He received a few doses of antibiotics and some anti-inflammatory through his IV (which thankfully they inserted after he was already under–thanks to the strawberry scented ‘special air’).  By noon the doc had cleared him for discharge.  They re-dressed his bandage since it was already 3/4 of the way falling off…he is a 2 year old after all.  And sent us home with meds for pain, and another antibiotic.

There was a slight mix up with the RX–as in the doc wrote the wrong one.  We filled it, paid $179 for it, only to discover after talking between us that it was the wrong one.  The nurse verified our theory with the doc and the pharmacy reluctantly refunded our money.  They didn’t have the new Rx, so the nurses called all the pharmacies in our area only to concede to an intra-pharmacy transfer (in-patient to out-patient)…sheesh!

Elliott doesn’t seem to notice the bandages, hasn’t complained about his hand, and has slept 2 solid nights without waking once (something that hasn’t happened in more than a month).

What an ordeal.  But, I learned an important lesson.  You may have already guessed it.

It is to trust myself.  I know my son.  I know when something isn’t right.  I know that even though he wasn’t directly complaining about pain-that something was wrong.  And that sometimes injuries manifest themselves in other ways–like night waking or malaise.