Current skills include sitting up, rocking back and forth on my hands and knees, putting my mouth on everything, and pulling myself up onto my knees.

I have 2 teeth coming in on the bottom.  I love smiling. And I am enjoying eating.

I don’t cry often, but when I do I am usually tired or want to nurse.  I laugh freely, and can easily make my brothers smile.

The morning of Trea’s birth.  One last picture with our family of 4.

Grandma and Bobbots welcome their last grandchild into the world.

The big brothers finally get to meet their sister.  They look so proud and sweet! 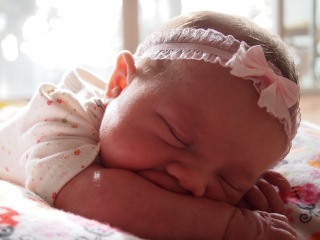 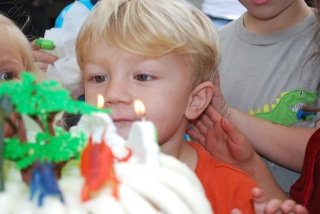 I am mentally planning and seed planting for Spencer’s 4th birthday.  I went back through my pictures to remind myself what we have done in the past, only to realize that I haven’t posted ANYTHING about his last 2 birthdays.  I suck.  I am reinforcing the 2nd child syndrome.

So, here is the synopsis.  We had a small birthday party at our (old) house.  I only invited kids that were Spencer’s age, and only a small number of kids.  It was lovely and low maintenance.  We had lunch, ate cake and the kids played.  Fun times.

July 1, 2011February 21, 2015 | thedarwinsgirl
January 15, 2011February 21, 2015 | thedarwinsgirl
Like usual, I am delinquent in posting.  Spencer celebrated his 1 year birthday in late November.  I wanted a small party, but as is typical, we had a large gathering.  I am incapable of throwing a small shindig.
It was a wonderful morning party with many of the kids he sees and plays with on a daily basis from Stroller Strides, and a few of my friends.  Along with the family that was able to travel to San Diego to celebrate.
We had a checkered flag themed party, and kept the decorations and fan fare limited.  I did make a 4 layer white and black cake.  Apparently black food coloring turns poop green.  Good to know.
It was a lot of work to have his party and then go full force into the December holidays.  Next year we are going to have his party the weekend before his birthday, depending on when the Thanksgiving holidays fall.
Published with Blogger-droid v1.6.5
July 19, 2010February 21, 2015 | thedarwinsgirl

Last night was the first night that Spencer slept most of the night in his crib.  We put him down at 7pm, he woke at 10:30pm for a feed, then went back to sleep until 4:30am.  Not only is the sleeping in the crib a big deal, but the amount of sleep without waking or needing a feed is a record.  Needless to say–I was a happy Mommy this morning.  Too bad Spencer doesn’t mimic the sentiment.

2 weeks ago he broke ground on his first tooth, and last week a second one popped up.  Ever since then, my sweet and smiley son has been replaced with a whiney, fussy one.

There has been a lot of practice crawling and pre-crawling activity but nothing that is clearly real crawling.  He can more around the room though by lunging and spinning on his tummy and occasionally rolling over (something he doesn’t prefer).  I have no less than 15 video’s on my phone of him almost crawling.  I am not rushing it since I know that he will be a handful when he does become mobile.  But, I want him to start crawling simply because he is so frustrated by his inability to move!

On the food front, Spencer has started to take a more active interest in eating.  He doesn’t care for fruits as much as savory baby foods.  His favorite jarred food is the organic rice and lentils.  But his top pick is any food he can eat with his own hands–puffs, cheerios, bread pieces, crackers and veggie’s.  He will tolerate banana chunks and raspberries if he is in the right mood.

Elliott celebrated his 3rd birthday!  My little boy is now officially categorized as a Pre-schooler.  Sniffle, sniffle.  We had a small party is his Grandparent’s house the last weekend in June for him.  We also celebrated by taking him to dinner on his official birth date and we celebrate while we were on our staycation with my in-laws July 4th week.

That is Elliott pointing out the fact that I did NOT light all of the candles.  In the midst of singing we had to stop, re-light the candles and start again.  I love that kid.  And of course, eating the enormous cupcake.

Elliott always enjoys spending time with his cousins, who are 6 and 8 years old.  There is a natural bond between them that seems to allow them to play together with very little fighting.  Elliott tries to keep up with the 8 year old, and is always exhausted by the end of the day.  As a result of trying to keep up he has to push himself and his physical limits, lest he be left behind!  By the end of the visit he has increased his independence and his self confidence and I have learned to let go just a wee-bit more–a win-win for everyone!

In other big news, we enrolled Elliott in preschool.  He has been going to the same home-based daycare since he was 6 months old and we now feel he is ready for a change.  It has been a huge decision for us since we LOVE the situation he is in now.  But, there were several factors that influenced our decision.  One was that it was 15 miles from our house.  Another is the space factor.  We wanted him to be able to run around and be more independent.  We also want him to start a small amount of structured learning.  He knows his ABC’s by site, he can count to 15 and knows his numbers by site to ten.  He knows colors, shapes and speaks clearly.  Unless it is the “l” sound which comes out sounding the same as a “w’ sound…  We believe in kids being kids as long as possible, but we also think that learning can be fun.  And since kids are little sponges that now is the perfect time to solidify the fun of discovering new things, ideas and concepts.  Lastly, the preschool we chose is close to our home and is very reasonably priced.

And that brings everyone up to date with the goings on of the wee ones.  As for the grown-ups in the house–the hubby is working and stressing like crazy.  We are both torn between wanting a bigger house and fixing up this one.  We have been house browsing on the weekends, and of course, everyone house I look at that is bigger than ours is ‘the perfect house’.  And then we come home, and talk about our house and fall in love with it all over again.  And so it begins.