I went for my first non-stress test yesterday. Just like its name, it was fairly relaxing. They hooked me up to a fetal heart rate monitor and had me indicate when I felt activity.  After 20 or so minutes on the machine we were done.  She is moving around a ton, and her heart rate is perfect.

They also do a short ultrasound to ensure the babe is in position and to measure the amniotic fluid levels.  Again, all systems go!  The really cool part was seeing her practice breathe on the ultrasound.  I have felt her doing it in-utero, but didn’t know for certain there was a real thing such as practice breathing.  It was amazing to see on screen and be able to put the two things together.

I am looking forward to this pregnancy coming to an end, but I will miss feeling this being inside of me.  *sigh*

It feels like I have gone through a belly growth spurt.  They say your baby gains the most weight in the last month of your pregnancy, and I suspect my belly is proof!

Yesterday I felt some relief in my ability to breathe and the pressure on my stomach has gone down.  But, my hip pain and pregnancy waddle have kicked up 10 fold.  They say that only FTM’s experience lightening but this babe has certainly made a small transition into my pelvis.

Throughout this pregnancy I have had to luxury of sleeping really well.  However, over the last few weeks my sleeping patterns have been disrupted with what I suspected was the need to pee.  But, I kept hearing this sound when I woke up and my throat was really dry.  Duh, it finally became evident to me that I was waking myself up with MY OWN SNORING.  I made some adjustments to my pillow palace, and started using my nasal spray again, as well as breathe right strips and I am back to sleeping well (and I use well within the context of being 9 months pregnant and huge).

The kids are getting excited about the birth and upcoming changes.  I am trying to plan and forecast the best I can for how our life will change, but you can never really plan for it… Our nursery is set up, clothes washed, diapers purchased, gear staged and car seats on order.  I need to pack my hospital bag and get a plan of action for who is going to take care of the kiddo’s once I go into labor.

I have been putting off writing.  I think it is because once a certain amount of time passes–it becomes too difficult to catalogue everything into one post.  I don’t want to miss anything, but there is just too much to write about without putting it in list format.  So, to catch up here is my list:
1.  The Thursday before Halloween Elliott broke his clavicle.  He ran from his room, bounced into the couch, and fell on the floor (an activity that happens daily).  He complained and cried and couldn’t sleep that night.  So, when Friday morning rolled around–we decided it was best to be safe and save ourselves a possible ER visit over the holiday weekend and called the doctor.  A few hours later and his second visit to the Radiologist and they confirmed the broken collarbone.  The RX was an arm sling, OTC pain relievers and light duty.  Let me say that being 37 weeks pregnant, actively potty training, trying to keep a 2 1/2 year old on light duty and having all of your in-laws at your house for the weekend is no easy task.  A week and a half later though and he is doing fine. He is still not actively using his left arm instead choosing to let it hang limp by his side and occasionally complains of pain–he isn’t holding back as much as he was. 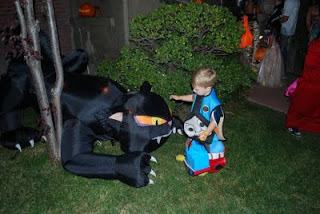 2. Baby #2 is head down and in position.  I can feel this intensely as the pain and pelvic pressure this last week is almost unbearable.  As I sit here and type I have a heating pad placed between my legs trying to ease some of the pain and discomfort.  Each time I get up, move or attempt to walk I am faced with a sharp pain.  This morning I tried to roll over in my sleep—only to wake myself up from a nice slumber with a jolting pain.  I feel lucky that I have felt so good for so long, but this certainly makes up for it.  I can only hope that this is my bodies way of saying that it is more ready to deliver this baby vaginally than the last go round.  If I could predict—I would say I am going to go into labor sometime next week. 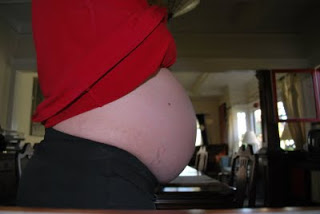 3.  I went ahead and scheduled the remainder of my doctor’s appointments through 41 weeks.  Because I am ‘advanced maternal age’ I also have to start non-stress tests at 38 weeks—so I scheduled those as well.  All of the babies clothes are washed, the co-sleeper is set up, the swing is ready, the changing table is back in place, the infant car seat is installed in my car—the only thing I need is to pack my hospital bag and get newborn diapers.  I figure that I can do that this weekend (Saturday will be 38 weeks).  Once I buy diapers I expect to have this kiddo shortly after.  One can hope, right?
4. I am very much looking forward to having my body and self control back.  While I don’t mind hosting I am ready to have my mobility and lung capacity returned to me. Although I am not looking forward to dieting and working the 40 plus pounds I have gained off. I do long to put on a pair of my skinny jeans.
5. Our backyard remodel is almost complete!!!  The hubby has spent the greater part of the summer and fall working on it by himself.  We decided that based on the drought that San Diego has been experiencing for the last several years, and the increased cost of water that it would be best to reduce our overall consumption amount.  Our yard was a lush grassy oasis–and now it is a flagstone covered sanctuary.  Half the yard now has flagstone and some carefully placed planters.  While the other half we are trying to re-seed with low water grass.  We rid ourselves of many of the potted plants and that has also freed up space on the covered patio.  I am excited to   have the project completed, the tools and debris cleared and a new yard to enjoy.