On our drive home from the family holiday extravaganza in December I was telling hubby that I was feeling bloated and unhappy (read: fat and ugly).  This was likely because my underwear were cutting off the circulation to my brain.  I gained 5 lbs while home for 9 days during Christmas.  4 of the 5 lbs I attribute to See’s candy, and the other 1 lb is the fault of Peppermint Lattes.  I do not take any personal accountability for the weight gain of course, and despite my efforts I have yet to loose it.  This is a different post topic altogether though.

In any case, I was feeling unattractive which forced me to proclaim that I felt like my hair looked bad (particularly after seeing it in 100’s of photo’s that week unwashed or combed) and I was shocked at the amount of wrinkles I had on my forehead.  I was on vacation people!
While stewing and brewing during the drive home I came to an epiphany–I would get bangs. This solved 2 of my problems at once!!! I am a genius.
A few days later I went to the hair salon, persuaded the hair stylist that yes, indeed this was what I wanted and walked out with fringe.
I liked it for the first few days.  Then, as the days went on I became increasing more insecure as a result of my new bouffant.  I was certain that they made me look like I haven’t had a ‘new’ hair style since the 80’s.  All of my friends were very complementary and have only offered positive feedback.  The most frequent complement I have received is that it makes me look 10 years younger.
I could infer that I look younger because my fringe covers my wrinkly forehead–that would make me feel 100% justified in my decision.  However, my personality dictates that I analyze it to nth degree.  Therefore I have determined that the reason I look younger is because I actually DO look like I am from the 80’s.  And the similarity and familiarity to the 80’s is actually what is making me look younger.
You decide. 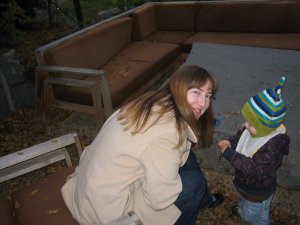