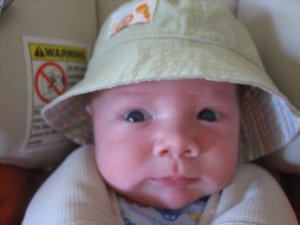 Yesterday, On Friday the 13th, Elliott’s bellybutton fell off. It was kinda gross, and smelled yucky. I suspect my sniffer is extra sensitive lately. At the first sign of spilled breastmilk, I can smell it and need to change clothes (that applies to his and/or mine). Hubby says I am extra sensitive to it.

I have a gaggle of coupons for Huggies diapers (we were using Pampers), so being thrifty I sent hubby to buy some. 3 times last night his diaper leaked. I had heard that certain brands work better with certain baby body types, and now I can attest to that. Does anyone want a bunch of Huggies coupons?
Other things to note, looking back I only got to take 7 days of maternity leave… I should have trusted my instinct and gone out on leave sooner. However, since I had a c-section I get 2 more weeks of State Leave.
Hubby says I have a downturn on my face, and is worried about the Baby Blues, or worse. I have been thinking about that alot (since I did suffer from a bout of depression during my 2nd trimester), and have been very sensitive to the possibility. However, after taking inventory…I don’t think I am affected. I am a bit bored and stir crazy being in the house all the time. But, with the surgery recovery period they warn you not to push it to much in the first 2 weeks, plus they say don’t drive. Lastly, I am kinda scared to drive still (and on a side note, I need to take my car into the VW dealer to get the latch system installed/upgraded…which BTW they do for free!). I stopped taking the pain killers after a few days (they were making me loopy and pretty spacey), and am just taking a motrin 2x’s a day. I have been up around since day one, and pretty active and mobile. I am the type of person who cant sit still when there are things to do (and my ocd type personality wont let me sit for long-there are things to organize!). I am looking forward to regaining my Independence (my car and my body), and getting out of the house with Elliott. I suspect that will do a lot to improve my mood.

I am very much looking forward to the next week. We have had visitors at our house almost every day since I went out on leave. The first week my girlfriend from home stayed in our Airstream while attending a conference. Then I went into Labor, and had visitors almost every day in hospital. Then we came home and had people who stopped by daily. Then on Sunday hubby’s family arrived for a long planned SD vacation. The SIL and BIL et. al stayed in a hotel, while the MIL stayed here. Initially it was a bit overwhelming. Mostly because we weren’t aware of the sleeping arrangements, or what the weeks plan was. Plus, we weren’t expecting to have Elliott during their visit. But, all in all it worked out. They left yesterday. Now, today we have another friend from back home who wants to travel down here to visit for the day. I must say Elliott is one popular kiddo.

Hubby and I are falling into a routine, which is nice. We were actually even able to watch a movie last night (although it cut into our requisite sleeping time). It was nice to have some adult entertainment.

One thought on “Day 14 for my little chipmunk”